By Holly and Dave
http://www.dreamperfected.com/2018/06/setting-house-modules.html
As we begin our seventh summer on Martha’s Vineyard, it’s hard to believe that our shingled beach house, now weathered to a perfect shade of New England gray, was built in a factory and delivered to the island as four separate, shrink-wrapped modules.  I still get a tingly feeling when I scroll through the photographs of our house set day.

Our set date was scheduled for the third week in February, which also happened to be school vacation week.  Dave and I hadn’t planned on being at the house set, but changed our mind last minute, justifying the extra expense as “a once in a lifetime experience,” which it was.  We arrived on island the night before, and stayed at the Hanover House in Vineyard Haven.  While the sections of our house floated on barges into Vineyard Haven harbor, I tossed and turned all night long, unable to fall asleep.

The next morning we were up early, but I was too nervous to enjoy the gourmet breakfast prepared at the inn.  I wanted to get an early start, so we could walk around the site and check out the foundation before all of the construction chaos began.  The first module, pulled by a semi labelled “Oversize Load”, arrived right on schedule at 8:00 a.m., with both a state police and OBPD escort by its side.   It’s crazy to think that the state police would stop traffic during morning rush hour just for you, but building a modular home on Martha’s Vineyard is a big deal. In fact, the #7 bus, which runs down Pacific Avenue every hour, was also temporarily detoured to make room for our house modules.
Each section was delivered on a trailer and parked on Pacific Avenue in front of our new neighbors’ homes (fortunately our neighborhood is comprised mostly of seasonal residents who weren’t there at the time).

Setting the house modules was an incredibly meticulous process.  Dave and I were impressed by the precision with which the crew guided the placement of each section.  The crews from Westchester Modular Homes and Squash Meadow Construction worked together to align (and in some cases realign) each module perfectly, accurate to 1/8 of an inch.  An eighth of an inch!  The photos below do not do this process justice; you really needed to see this in person to appreciate it. 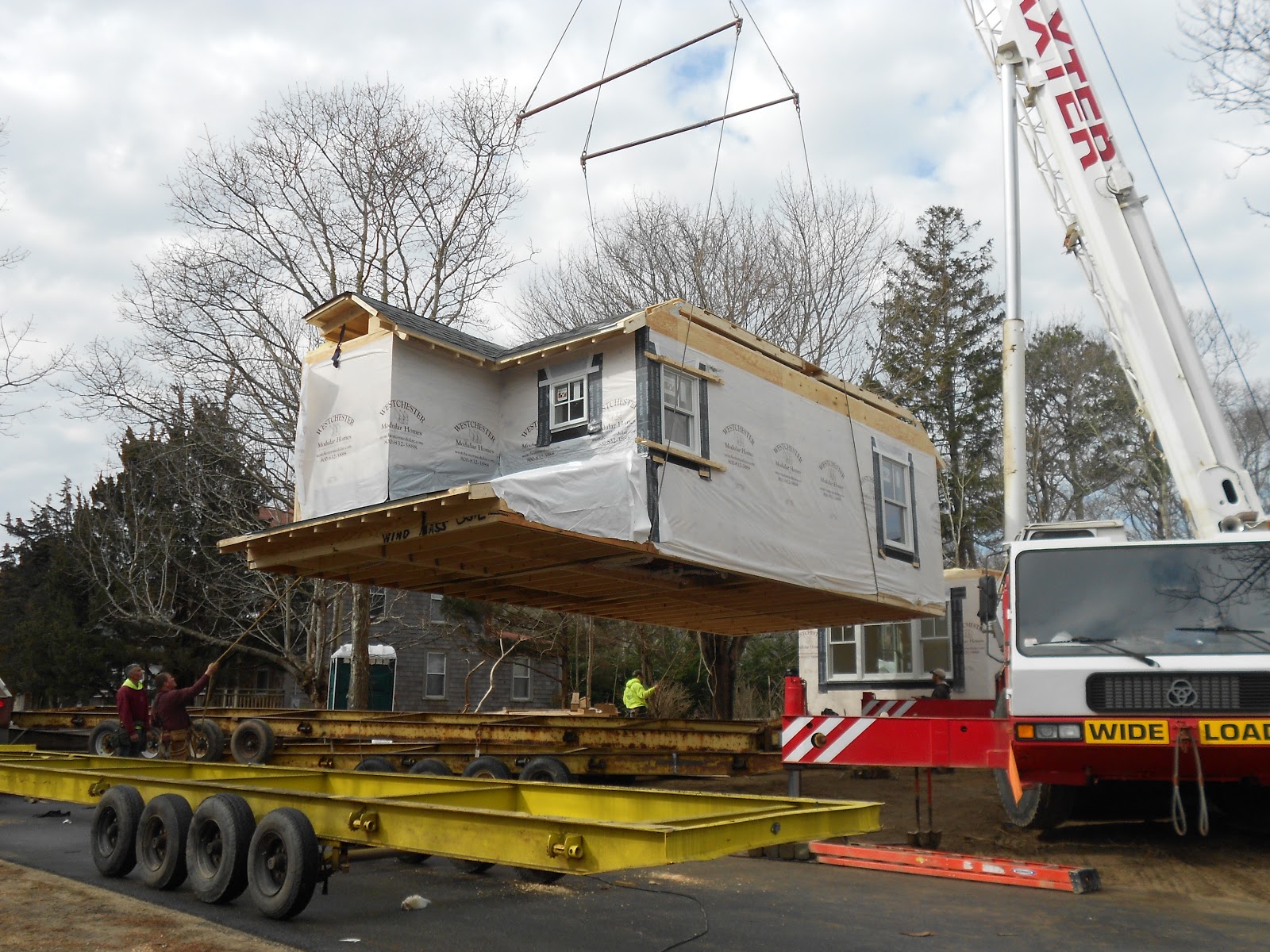 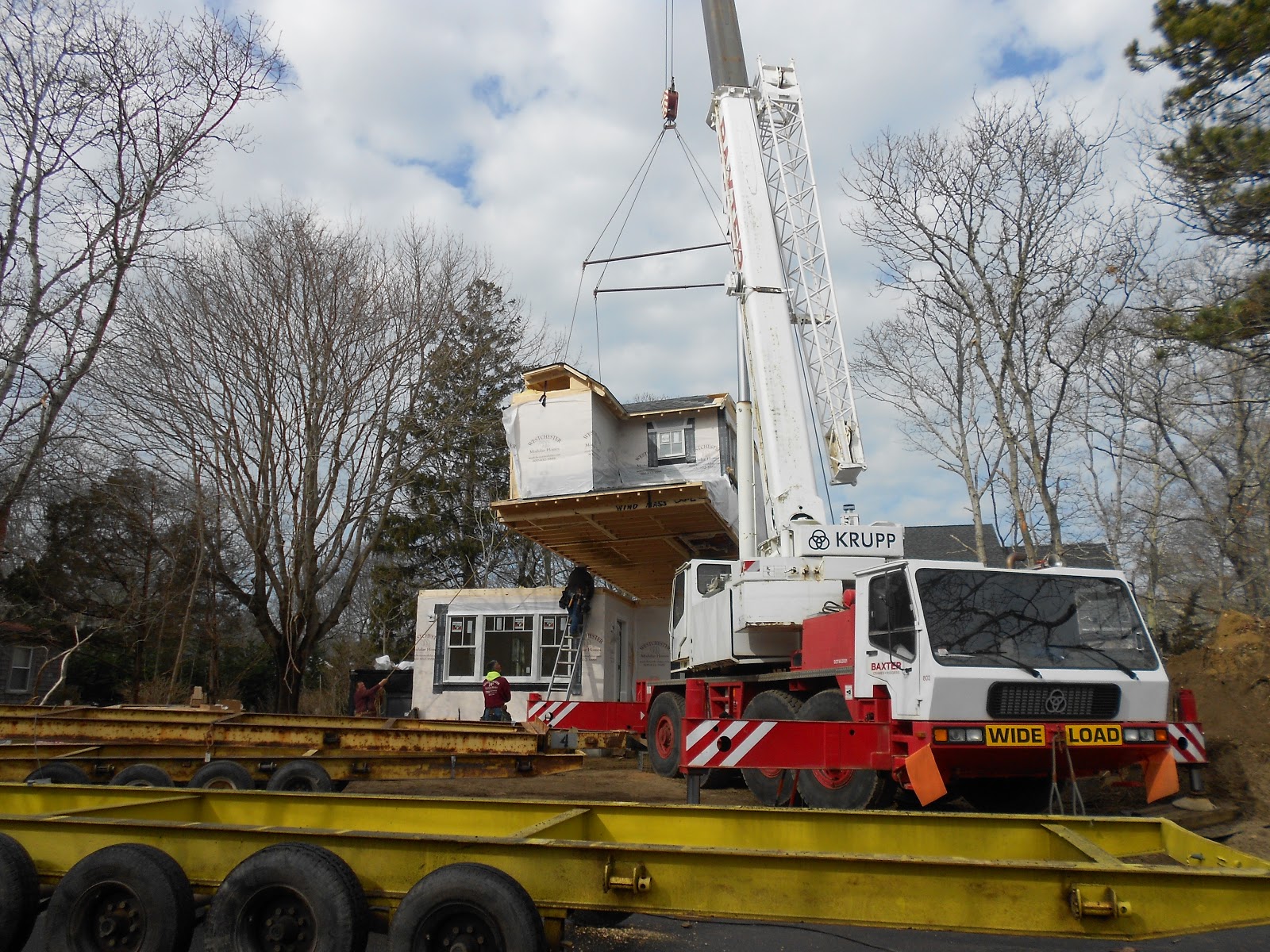 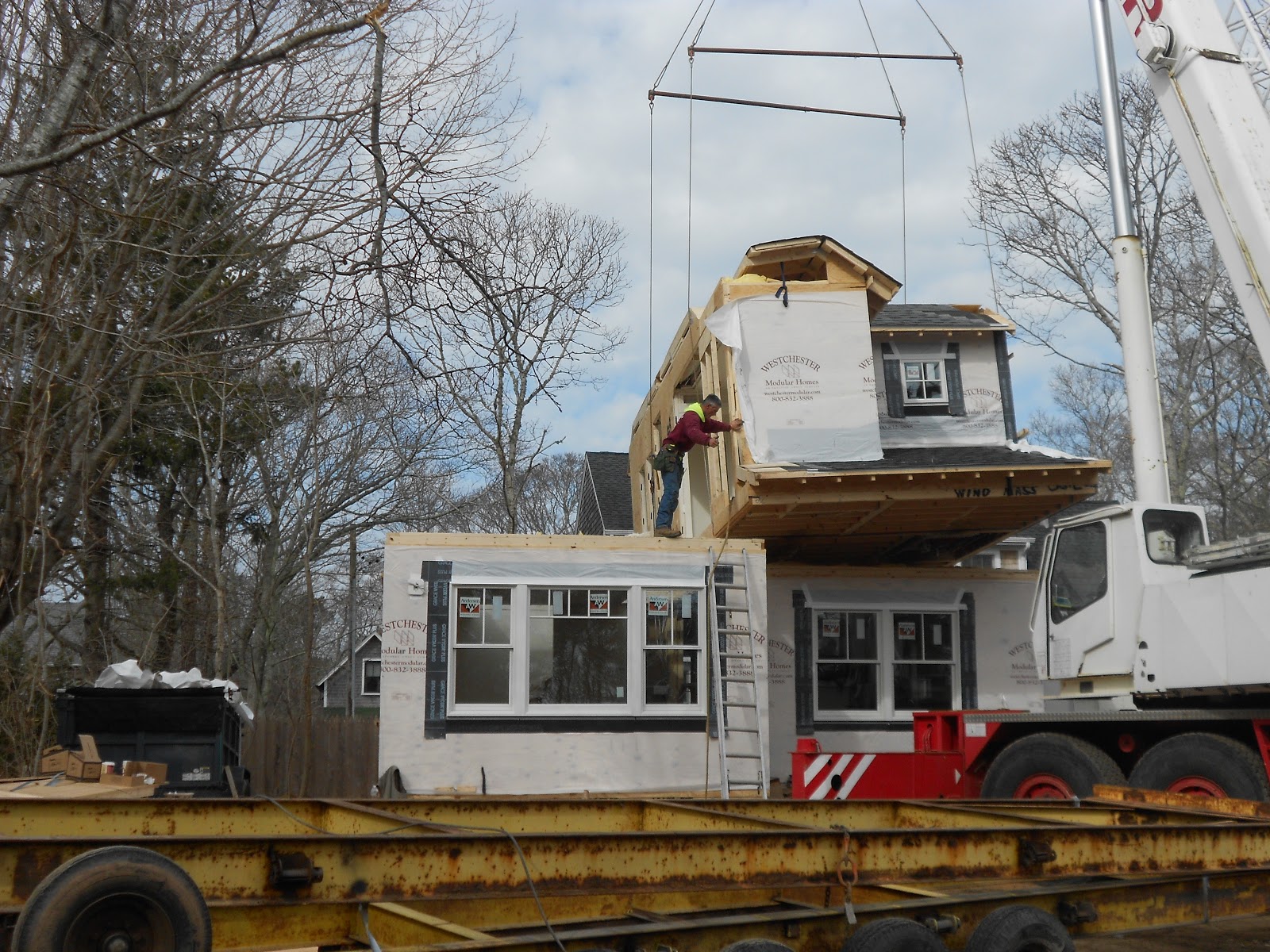 When all of the modules were set, the construction crew attached the roof and closed up the house, protecting it from the elements.  This is a definite advantage of modular construction over traditional “stick-built” construction.

Our house was assembled by noon.  Dave and I were so excited, we bought lunch – Rocco’s pizza – for the entire construction crew, including the crane operator and the policemen.  I remember enjoying a slice of pepperoni pizza when I walked through the front door for the first time.  It was easy to imagine what the inside of our house would look like when it was finished because so many things had already been installed at the factory – toilets and sinks, closet and bedroom doors, kitchen cabinets, a microwave oven.  The ceramic tiles had even been installed on the bathroom floors. 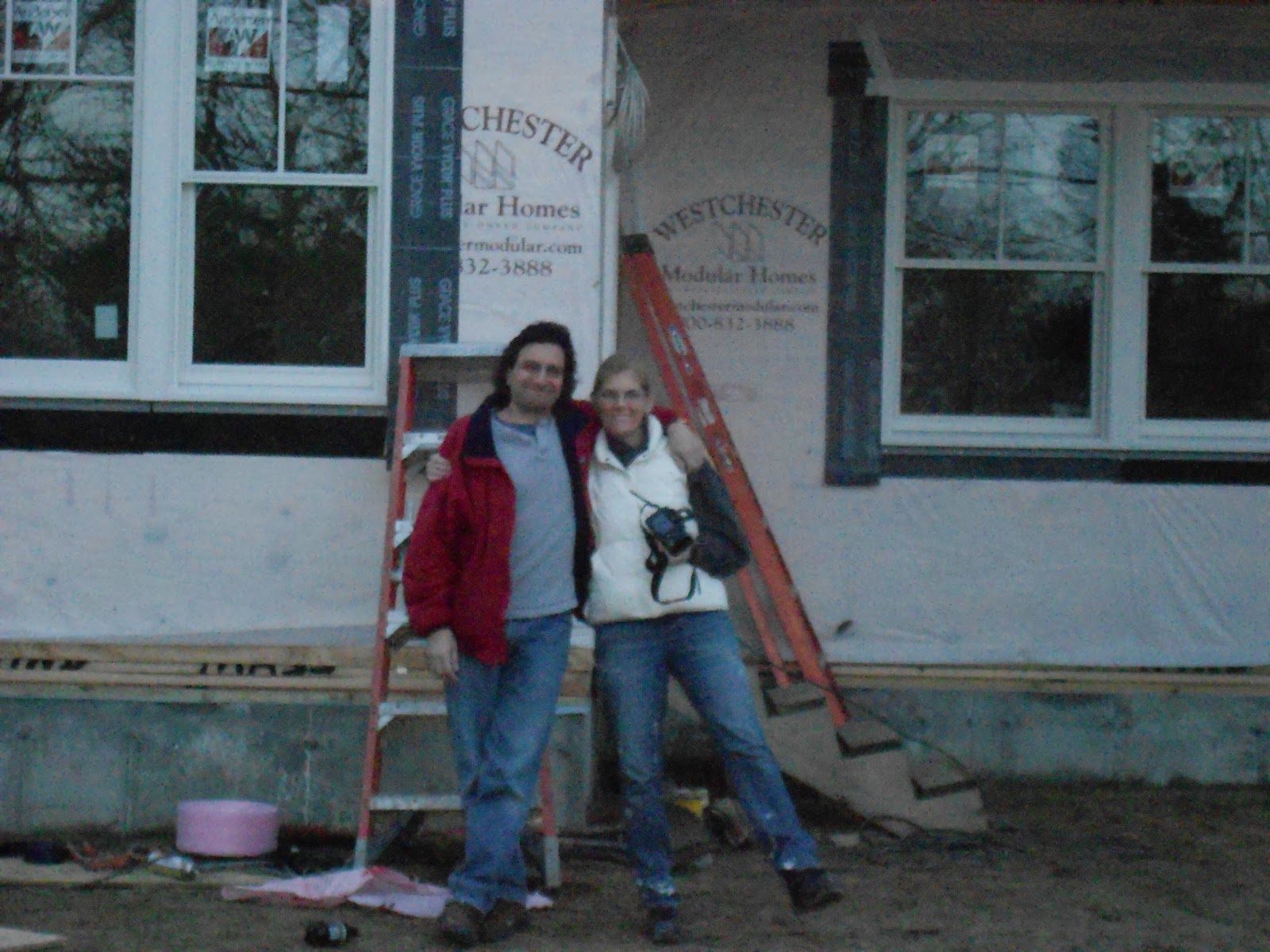 Our dream home was finally becoming a reality! There was still plenty of work to be done- plastering, shingling, painting, landscaping – but we were one step closer to being homeowners on Martha’s Vineyard.